Following the success of the 2009 ACGT Regional Plant Biotechnology Forum workshop, the University of Johannesburg (UJ) hosted the Forum’s first scientific meeting on 25 May 2010. 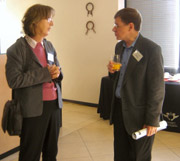 Sponsored by Pioneer Hi-Bred RSA (Pty) Ltd and hosted by Dr Eduard Venter of UJ’s Department of Botany and Plant Biotechnology, the meeting was attended by over 55 delegates representing the CSIR, University of Pretoria, Wits University, UJ, and the Agricultural Research Council (ARC). Included in the programme were four presentations – including a ‘scene-setter’ by the ACGT’s Director, Dr Jane Morris – as well as a poster session. 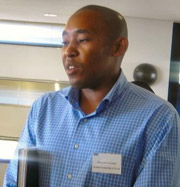 The UJ meeting follows a decision taken at the 2009 Regional Plant Biotechnology workshop to establish an ongoing forum with the aim of furthering the plant biotech agenda in Southern Africa and building broader collaboration between institutions. This was the first of a number of planned scientific meetings of the Forum and was organised with the objective of affording younger scientists and students a platform to meet and interact.

According to Dr Morris, this aim was achieved with even greater success than was anticipated. “We received significant interest, particularly from students – some of whom were surprised to learn of the ACGT’s existence. They showed a lot of enthusiasm towards the idea of a body that is actively addressing some of the ‘bigger picture’ strategic issues around plant biotechnology”.

Building on this momentum, the ACGT will be hosting another meeting at the University of Pretoria in September this year. “This time around we will be looking at increasing the number of scientific presentations on the programme and involving students more in that regard”, said Dr Morris.