Tinotenda Shoko is one of many young Zimbabweans who have managed to find opportunities both outside and inside their country during times of limited resources. He joins other RISE students and faculty from Zimbabwe who have brought high levels of energy, talent, and optimism to their fields – often as true leaders in their scientific activities. 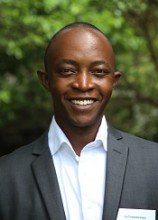 Tinotenda began with the benefit of family models: His father taught primary school in Mutawatawa, and he is still teaching there today. On the basis of his strong performance in grades 1 through 7, Tinotenda was admitted to a mission boarding school for a four-year ordinary-level education. He was powerfully drawn to science, scoring high marks in calculus, physics, biology and chemistry. He was then admitted to advanced-level coursework for two additional years, and did well enough on his exams to gain admittance to the University of Zimbabwe in 2002.

Despite his facility at basic science, he began to feel a tug toward the “real world” of industry. “Why?” he asked. “I thought it was more interesting, practical, and linked to the benefits that science brings to society. I saw so many people around who didn’t have enough food or money. I didn’t want to live like that, and I didn’t want other people to live like that. To me, education was a way out.”

Even with his strong educational background and encouragement, he faced powerful competition when it came time to enter the university. “Despite the stiff competition from others who were sometimes better prepared,” he said, “I did come in at the top of my class; I had to work hard and I’m still working harder.”

This appears to be an understatement. During his first year, Tinotenda tackled a daunting menu of pure science coursework that included genetics and molecular biology, mathematics, physical, general, organic and analytical chemistry, and cell biology and immunology. In addition, he also took agricultural economics, because of its links to practical areas, and statistics because of its central role in applied sciences. “I took 13 courses that year, 7 of which I passed with distinctions. I loved chemistry the best, and I got distinctions in physical and general chemistry.”

In the second year he continued at this ambitious pace, but he moved farther in the direction of applied subjects, especially food engineering, food microbiology, food toxicology, food analysis, sensory evaluation of food, food chemistry, and biochemistry. In the third year his courses were still more applied, and included meat technology, fruits and vegetables, cereals, fats and oils, quality assurance and experimental design, product development, marketing, and industrial methods. By the time he had completed his BSc in food science and technology in 2005, he had taken 35 courses in sciences related to his major and passed 16 of them with distinction.

After graduation, he immediately went to work for Blue Ribbon Industries, a milling company in Harare, as a quality control technician and research and development assistant. He helped develop a gluten-free flour blend that enabled individuals allergic to gluten to enjoy flour products. He did this by replacing wheat flour with a mixture of millet flour, sorghum flour, rice flour, and potato starch and determining the most appropriate ratio. The resulting flour, he said, baked and tasted just like wheat flour, although it required additional ingredients for successful bread making. He worked until 2008 at Blue Ribbon, which has since closed.

His interest in food science and technology was already growing beyond the content of his traditional coursework. He sought out a program at the Zimbabwe Institute of Management (ZIM) where he could learn more about the business side of the food industry, and from the ZIM he earned a diploma in business administration in 2007.

In 2008 Tinotenda continued his experience with the food industry when he took a job in Cape Town, South Africa, at a food processing company called Mexicorn that manufactures tortillas, tacos, and corn chips. As a Food Technologist, he was responsible for new product development and improving tortilla quality, including process and shelf life testing.

With this practical experience under his belt, he was ready for more science when a new opportunity presented itself. A former lecturer, keeping track of events at RISE, heard about the SABINA network and urged him to apply for a fellowship being offered at the University of Malawi. He sent his application to Jane Morris in Pretoria and was accepted.

“I knew my work had to be something in natural products,” he said. “I already had my objectives for the next opportunity to study.” He started working with local fruits and vegetables, with the objective of identifying their volatile flavor constituents.

“A problem for fruits and vegetables is seasonality,” he said, “which limits when people can find them in the markets. If you’re able to identify the compounds which constitute the flavor of a food, you can take that to industrial level and synthesize the flavor in the lab, making it available to everyone all year round.” Among the fruits he studied were Mobola plum and monkey orange, using solid-phase micro-extraction. He used gas chromatography and gas chromatography coupled to mass spectrometry to identify the volatile constituents. He also worked with some vegetables, including cassava leaves, and a herbal tea, using hydro distillation methods to heat the plant material, drive out the essential oils, and collect the oils for identification by gas chromatography and gas chromatography coupled to mass spectrometry.

Although Tinotenda has learned a great deal from his early work with foods, including his MSc research in applied chemistry, he is now aiming higher in his study of natural products. His dream is to complete a PhD on neutraceuticals, which are plant extracts that have not only flavor but potentially powerful nutritional and medicinal efficacy. The term, a conjugate of “nutritional” and “pharmaceutical,” is applied to products that range from isolated nutrients and herbal products to specific diets and processed foods. “There are so many diseases in Africa,” he said, “and medical costs are very high. There is also enormous biodiversity, and we want to tap into that to cure diseases.”

He has written a more formal personal statement about his dream to help people who cannot afford the cost of medicines, offering them instead cheaper but still effective alternatives. “In Africa, it is known that certain plants have medicinal properties or health benefits, but the knowledge has not been harnessed. There is not much scientific evidence to establish the link between a particular biological function and the identification of the specific compounds in those plants. In fact, most knowledge about the usage of these plants has remained traditional and undocumented.”

He put together his current educational strategy while in a short-term academic appointment at Chinhoyi University of Technology (CUT) in Zimbabwe as a part-time lecturer in food science. His responsibilities included teaching at the undergraduate level, developing learning materials, and participating in faculty seminars.

As he was completing this appointment in his home country, he learned of the next exciting stage of his career – the opportunity to continue his research under a second RISE scholarship. Tinotenda is now entering a PhD program under SABINA, this time at the University of Pretoria in South Africa, where he can anticipate strong mentoring and cutting-edge instrumentation. He has also applied for a Washington Fellowship for Young African Leaders, with the strong endorsement of SIG.

Once Tinotenda has earned his PhD, he looks forward to returning to Zimbabwe to apply the fruits of his research. He is confident that he will have an academic appointment and also work with Zimbabwe’s Scientific and Industrial Research & Development related organisations, focusing on product development and commercialization.