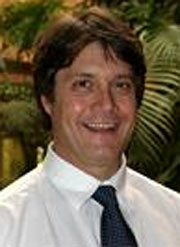 The Southern African Human Genome Programme has recently been successful in securing seed-funding from the Department of Science and Technology (DST) to kick-start the work of this ground-breaking national initiative. It is truly a national project which will involve a collaboration between scientists at education institutions, science councils, government and industry. ACGT’s partner institutions will be part of this project.

In its first phase, the programme is jointly coordinated by the University of Pretoria’s Prof Michael Pepper and Prof Michele Ramsay of Wits University and the National Health Laboratory Service. While currently in its infancy, the Programme aims to make a significant contribution to the understanding of DNA variation among southern African population groups and how this impacts on the health of the people of our country. Potential benefits could include new ways to diagnose, treat, and eventually prevent the numerous diseases and disorders that affect the people of this region.

According to Prof Pepper, two critical objectives of the Programme are to gather information about the pathogenesis of human disease in order to use this for medical benefit, as well as to develop the required bioinformatics skill and capacity to analyse the vast amount of data that will be generated. The aim of the programme is to pool efforts as a country and ensure benefit-sharing to the communities from which the genetic material is obtained.

“The infrastructure and skills that are required to obtain the information and analyse it, as well as the sheer quantity of information, means that we have to do it from a national perspective. When dealing with such a vast amount of information, it doesn’t make sense for people to be duplicating activities in different parts of the country”, says Prof Pepper.

The Programme will generate a database for participating institutions and collaborators who can tap into this central resource to analyse the genome data from whichever perspective is relevant to their particular area of study. “Whether they are looking at infectious diseases, diseases of lifestyle or if even if they simply want to examine the structure of the genome in certain populations without necessarily correlating it to a specific disease, that information will be there for them to use”, he adds.

The current DST funding will be used towards Phase 1 of the Programme, which is aimed at getting stakeholders together in order to make their contributions and inputs into the development of the programme. The first set of meetings will be with South African stakeholders including higher education institutions – with a strong emphasis on the previously disadvantaged, science councils, sequencing facilities, as well as private sector players that are interested in exploring these data. DST will be represented as the process unfolds.

The first phase will be developed towards the end of the year, and will be followed by meetings with international collaborators and advisors in early 2011. The final output to DST will be the development of a full proposal by mid-2011, which will be used towards obtaining further funding both locally and internationally.

While obtaining international input will be vital to the success of the Programme, Prof Pepper stresses that it is critical that the notion of sovereignty is kept uppermost when identifying the way forward. “A lot of genomic material has left South Africa over the past few decades, whether animal, plant or human. It is not appropriate, in a country with so much skill, that we should be relying on people from developed countries to do the work that we should be building the capacity to do locally.”.

He adds that, when it comes to understanding the pathogenesis of disease in an indigenous population, it is best done by the people who live in that area. According to him South Africa has some very specific patterns of diseases within its population groups. These need to be recognised and accepted, and analysed on the basis of what is objectively known about the disease – as opposed to relating the genetic information to what happens in other parts of the world, where the population structure is completely different.

Prof Pepper believes that the fact that this programme is working specifically on southern African genomes will also serve as a boon to the objective of building capacity. “Bioinformatics skills are highly sought all over the world so we do face the danger of ‘training for export’. However this initiative is unique in that, up until now, work on African genomes has not been done to any appreciable degree”. It is his assertion that this element of pioneering will act as an incentive for the people that are trained through the programme to stay in the country.